Leader of the Indigenous People of Biafra (IPOB), Nnamdi Kanu, has threatened that members of his group would henceforth publicly disgrace and humiliate corrupt Nigerian political office holders sighted in any foreign country.

“Any day any corrupt Nigerian political office holder is sighted in any foreign country, such a person would be publicly disgraced and humiliated.” he said

Kanu who expressed sadness over the gunfire incident at the Lekki tollgate on Tuesday, October 20, added

The Sun Newspapers correspondent in Kogi, Emmanuel Adeyemi, and an unconfirmed number of persons have been shot in Lokoja on Monday, October 26, as suspected political thugs attack #EndSARS protesters.

According to the News Agency of Nigeria (NAN), the journalist was shot on his way to the NUJ Press Centre located at Lugard Road in Lokoja, while another unidentified person was also shot on the same road.

It was gathered that the thugs, who were moving about in five unmarked vehicles, also visited Cemetery Road Junction, where they shot sporadically into the air. Several other people were also shot by the rampaging gunmen, who engaged the protesting youths in different parts of Lokoja.

Meanwhile, shops and business premises hurriedly closed down as residents scamper to safety.

#EndSARS Protest: This government should not act as if people trust them – Seun Kuti

Nigerian Singer, Seun Kuti has called on the federal government to grant the request of #EndSARS protesters and not make decisions like they have the trust of the masses.

Seun Kuti made this call while speaking of Channels TV’s “Sunday Politics” programme.

Commenting on the federal government’s claim of meeting all the request of the young protesters and calling for an end to the protest, the singer stated that the government does not fully get what is being demanded and what the protest is about.

“This government should not act as if people trust them. They should not wear that toga for themselves. That is what I am saying.

“People should not sit in their high offices in Abuja. Bring yourself off your high horse. Come and relate with the people that just voted for you. Come and really hear what is going on.

“They have done judicial enquiry against SARS two years ago, what came out of it? It was this same government.”

On claims of the protest being hijacked, Seun Kuti said;

“Don’t feel victimized, don’t think there is somebody trying to get you. No. These are your people trying to talk to you.

“This is actually a moment that we can actually build a bridge (between the government and the people), but they don’t want to hear that.”

The Bishops said the ongoing EndSARS protests by Nigerian youths are morally justified and the government must realise that what they are clamoring for under the #EndSARS campaign is a comprehensive reform of the entire Police Force.

In a statement on Saturday October 17, Most Rev. Augustine Obiora Akubeze, President of Catholic Bishops Conference of Nigeria (CBCN), the bishops noted that the audacity with which the SARS officials have been operating in the country is a manifestation of the failing state of Nigeria.

The clergymen said that disbanding SARS and setting up a new outfit called Special Weapons and Tactics (SWAT), shows the government’s lack of understanding and sincerity to address the issue.

The bishops further urged the Federal Government of Nigeria to listen to the cry for justice in order for peace to reign in the country.

Part of the statement read:

“Thus the cries of our children protesting against the brutality of SARS that manifests in extrajudicial killings, unlawful arrests, profiling of youths as criminals, the invasion of youths privacy by searching phones and laptops without any warrant or any just cause, and the incarceration of many of the youths in the SARS custody without trial.

“We the members of the CBCN have followed the protests with keen interest and call on the Federal Government of Nigeria once again to listen to the cry for justice so that peace can reign in our country. The protests seem to have a life of its own, and it is spreading all over the country; this shows that most Nigerians are facing the same oppression and brutality inflicted by the SARS.

“The audacity and impunity with which the SARS officials have been operating all the while is a manifestation of the failing state of Nigeria. Various bodies and patriotic Nigerians have expressed the opinion that just ending the SARS would not solve the enormous problems of Nigeria, because it is futile treating symptoms of a disease when the root cause is known.

“We reiterate that restructuring this country is a desirable path to be towed given the various developments in this nation. The knee jerk reaction of the administration by abolishing the SARS and setting up the Special Weapons and Tactics (SWAT) team portrays either the absence of an understanding of the entire problem or a lack of sincerity to address the issue.

“The Nigerian Government must realise that what the youths, on behalf of Nigerians, clamour for under the code name #EndSARS is a comprehensive reform of the entire Police Force and not a change of name; they call for a reform of all our government institutions and a reform of the entire nation. They are asking for a system that will be hard on crimes and criminals in the society within the ambience of the law, while at the same time treating every human being, citizens and visitors alike, with respect and dignity.”

“EndSARS goes beyond the SARS, and it is morally justified. We support the youths who have taken this step, and we caution that they are allowed without any intimidation to exercise their right to peaceful demonstration and should not be provoked or incited to violence.”

It was gathered that a 7-man gang allegedly broke into a shop at about 3am on Saturday, October 17, and made away with electronic gatgets worth thousands of naira and undisclosed amount of money.

The youths of the community laid ambush for the suspects. In the process, five of them were apprehended them while two managed to escape leaving the rest to face jungle justice.

A very disturbing and gory video from the scene shows the remains of the suspected robbers and a motorcycle in flames. The head of one of the suspects was missing from his neck.

Meanwhile, one of the youths condemned the act, describing it as inhumane and barbaric while calling on the Nigerian police to immedately arrest the perpetrators.

#EndSARS protesters in Abuja have continued their protests despite the ban on their activities by the Federal Capital Territory Administration FCTA.

The FCTA authorities had a meeting on Thursday, October 15 where they banned all the protests. They accused the EndSARS protesters of flouting all COVID-19 protocols during their protests.

Today, the protesters defied the order and have continued their match across streets in the nation’s capital.

The former Super Eagles forward was pictured holding a handwriting note with the inscription which read: #EndSARS#, #EndPoliceBrutality#, #Nigeria#.’ 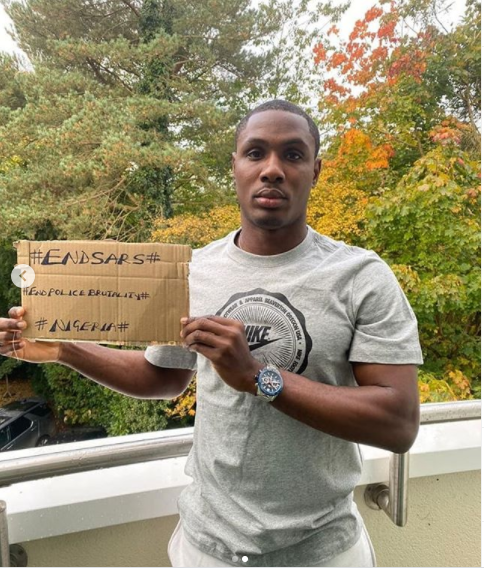 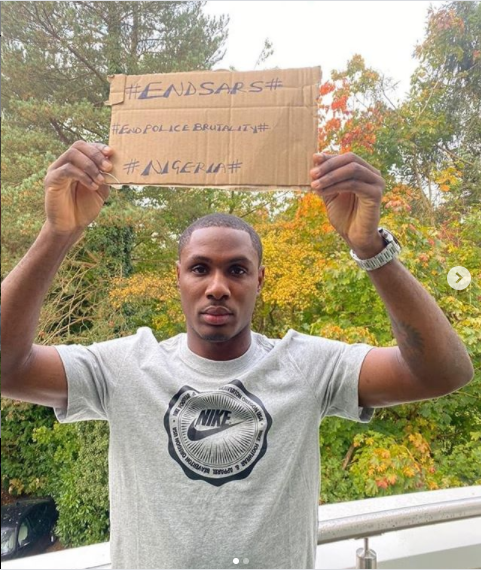 Here are some tweets below; 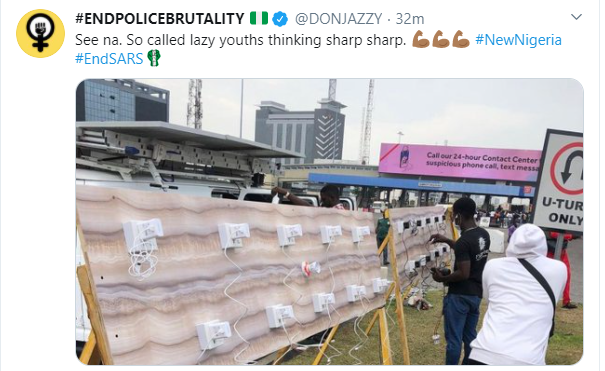 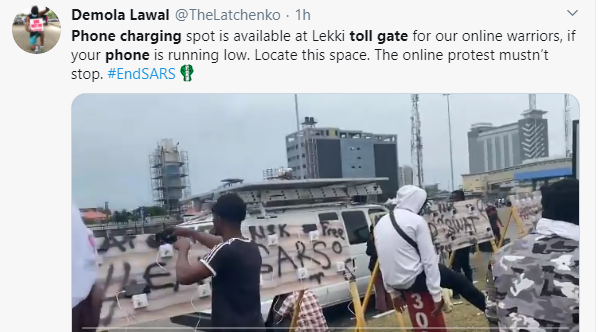 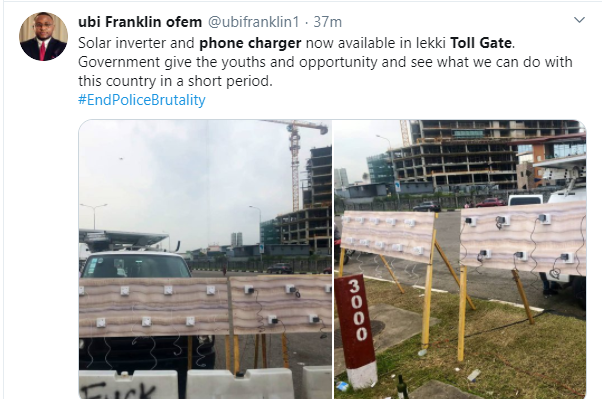 The Nigerians gathered in front of the Nigerian Embassy at the Victor Hugo area of Paris, capital of France, to demand an end to police brutality and human rights abuses by the police. They carried different placards with inscriptions like End SWAT, End Police Brutality. 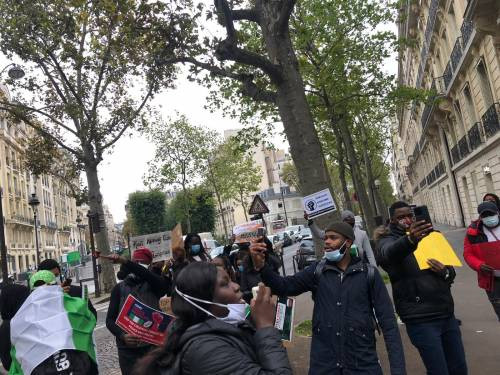 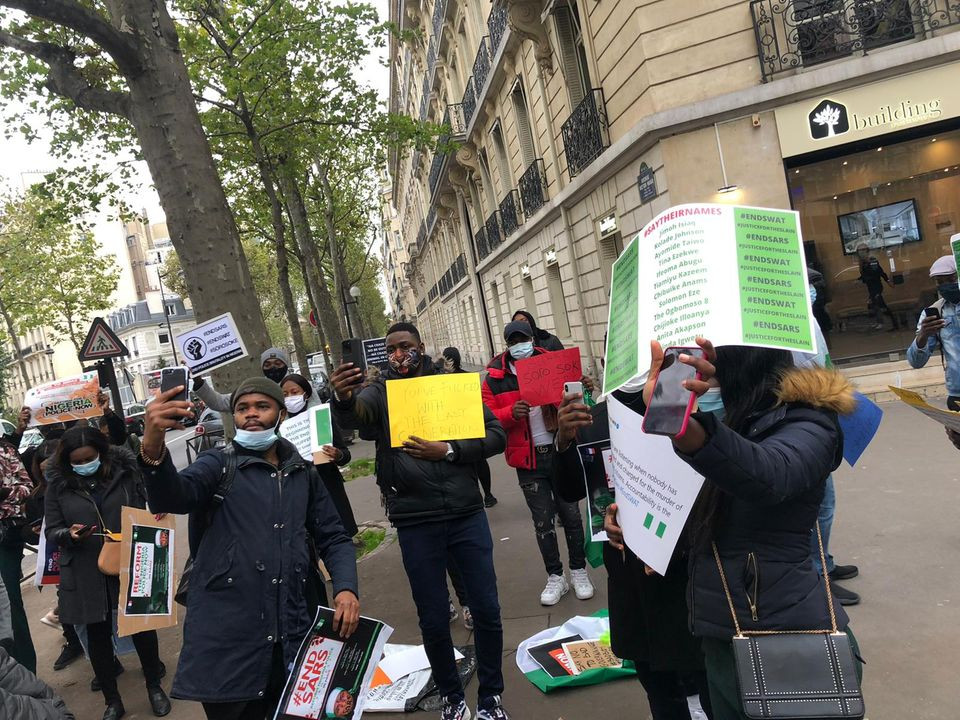 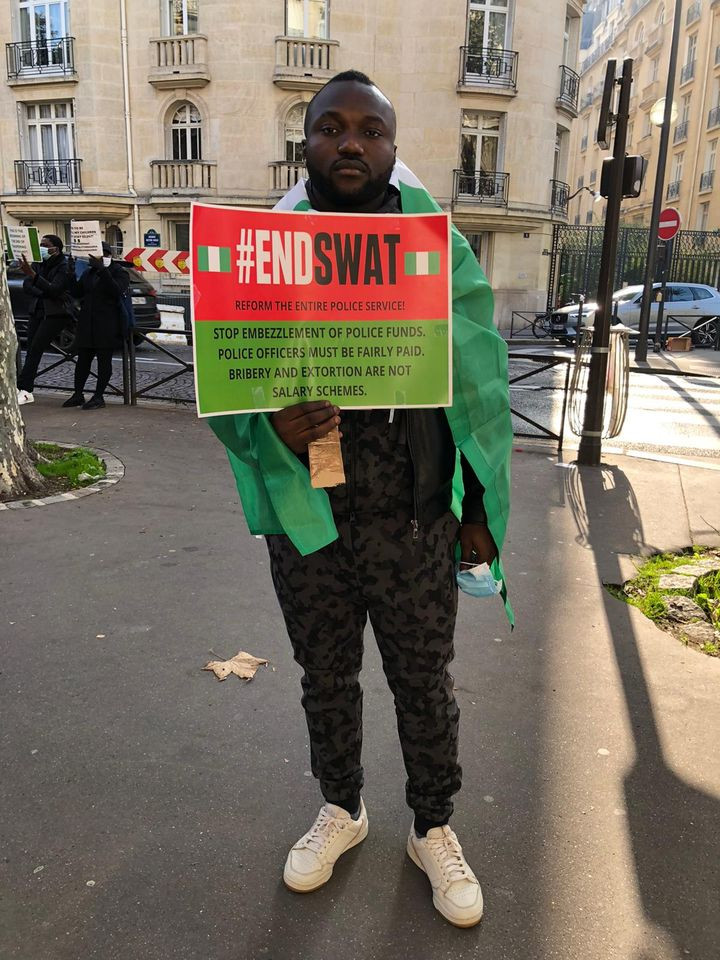 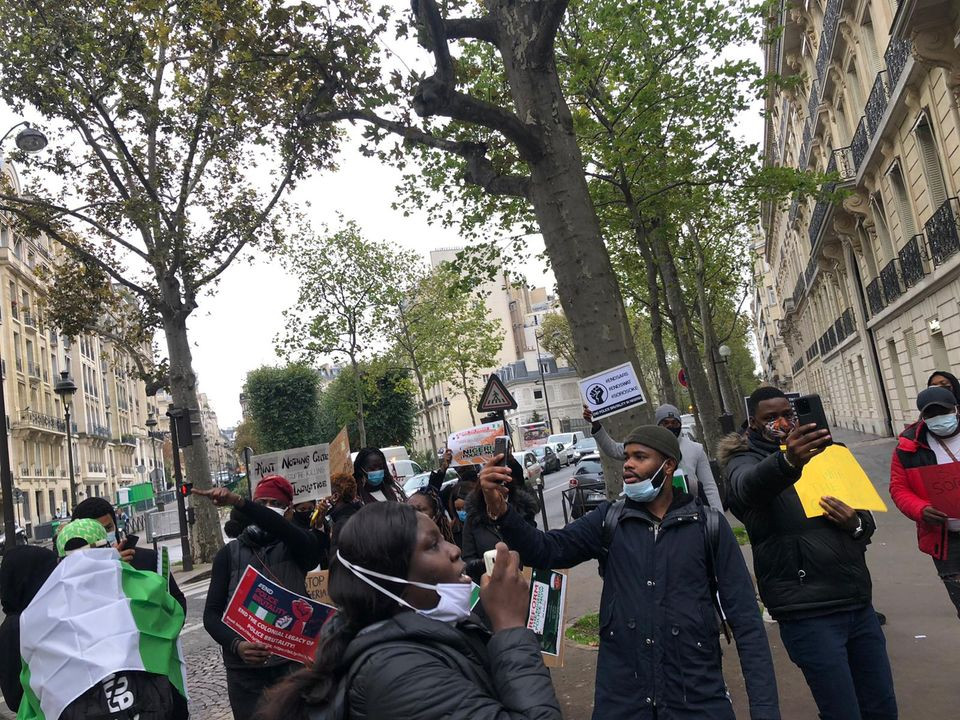